The constitutionality of mandates: Does that debate relate to wellness incentives?

Home Blog The constitutionality of mandates: Does that debate relate to wellness incentives? 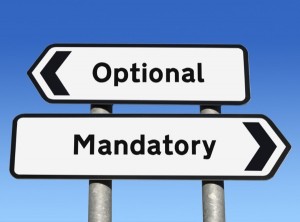 Last month when D.C. Circuit Court Judge John Bates nullified the Equal Employment Opportunity Commission’s (EEOC) regulations related to the use of financial incentives in employee wellness programs I parsed between the words coercion, incentive and inducement in an effort to consider why. Though the EEOC was presumably trying to harmonize their rules with the wellness provisions of the Affordable Care Act (ACA), I have argued that focusing on the motivation or burden from financial incentives alone will not yield an adequate definition of voluntariness. In making a case for “organizational contingent” incentives, I suggested an organization’s culture and an individual’s appreciation for the alternatives available for them to earn a reward, or avoid a penalty, were the variables that distinguished an incentive from an inducement. But then, as if employers weren’t already bothered enough about whether and how to act on the Bates ruling, along came the ruling by U.S. District Court Judge Reed O’Connor that held that the ACA, absent a tax penalty relating to the individual mandate, was unconstitutional. Though I resonated with O’Connor’s premise that the individual mandate was an essential component of the ACA, I was failing to understand why removing the tax penalty invalidated the law altogether.

The full, open access version of this editorial along with references, is at the American Journal of Health Promotion.

Initially, I attributed my confusion about O’Connor’s decision as simply related to our credentials. I’m a health educator; he’s a lawyer. He must be drawing on some jurisprudence that I wouldn’t presume to have heard about. I was exonerated, however, when within hours of the ruling many legal experts with more confidence, not to mention more relevant credentials than I, were also scratching their heads. In a blunt reaction to O’Connor’s view that a penalty-free mandate amounts to governmental coerciveness, Nicholas Bagley, a University of Michigan Law School Professor, wrote: “To put it bluntly, that makes zero sense. The judge asserted — without any support — that the penalty-free mandate “requires [the plaintiffs] to purchase and maintain certain health-insurance coverage. But that’s not right. An unenforceable instruction to purchase insurance is not coercive in the slightest.” Again, I’m no lawyer, but as someone with public health sensibilities, I view many laws as warranted merely due to their role in advancing the greatest good for the greatest number.

Some people view social programs of any kind as unwarranted but especially so those that wield a bigger stick than others. If someday I elect to decline my social security benefits, I don’t expect the government will penalize me or my fellow citizens to be critical. But seat belt laws, helmet laws, tobacco and alcohol age limit laws are all examples where the intent of the law is defensible and constitutional, independent of the penalties associated with breaking those laws. I’m also no actuarial scientist, thank goodness, but insurance works due to the law of large numbers and putting the individual mandate aside should evoke plenty of debate about what other inducements are needed to keep the ACA workable. If not via taxes or financial penalties, what other social reforms will be needed to keep insurance affordable for all? Most public health advocates I know believe a single payer solution is the blindingly obvious solution, albeit one that will likely defy consensus in our lifetimes due to other popular opinions about limiting governmental influence, or, some would say, coercion. Which brings me to the connections between O’Connor’s decision, the Bates decision and the ongoing debates we will and should be having about the role of incentives in health promotion and achieving unalloyed voluntariness relating to all that we offer and support.

What do reasonable people believe about taxes?

Most accept taxes as the inevitable means we have collectively embraced to fund public goods and services. Though some lament taxes as nothing more than sanctioned robbery, most acknowledge the interdependencies between government and the citizenry in maintaining a safe and functional society. Some go further and consider taxation as a means to a fair and compassionate world. Debates about access to health and healthcare are fueled by just such competing views about the role of government. Nevertheless, it’s hard to refute the powerful affect taxes can have on individual choices about where to live, where to shop and what people buy or give up buying. Read Tom Farley’s “Saving Gotham” for an inspiring case of how prudent community organizing, shrewd tax policy and bold governmental leadership has saved millions of lives. Still, taxation and individual liberty will always be entangled. One of the first conferences I organized decades ago was entitled “Private Lives/Public Policies” and the keynote speaker was Howard Leichter, the author of the book “Free to be Foolish.” Leichter’s book develops the argument that, to curb problems, the United States has been more apt to use regulation in contrast to Great Britain’s preference for voluntary agreement. He also shows that regulation is more effective in producing sustainable societal change.

“Though I oppose all manner of discrimination, it remains that wellness programs, and public health practices more generally, are far from indiscriminate.”

For employers interested in creating incentives for participation in worksite wellness programs, it will always be a challenge to strike a balance between the paternalism needed to protect and improve lives and the sensitivity to employee autonomy needed to build trust and facilitate lasting change. I believe incentives should be organizationally contingent rather than health contingent. That is, the more a company has created the environment needed for psychological safety and the more they have built a culture that makes healthy choices easy, the more their employees will feel incentives as motivating rather than coercive. One cliché suggests that change happens at the speed of trust. Bagley, who I cited above regarding our shared views on the recent ACA ruling, has also written critically about laws affecting employee wellness. He and I have each written about how assessing employee health can only be legitimized under a rubric of preserving employee privacy. Bagley has serious concerns that current regulations could enable employers to discriminate against employees based on their health status. I’ve discussed how health assessments and incentives can be effective when subordinated within a broader, comprehensive population health strategy. But each of our competing vantage points brought us to the same conclusion that infringing on privacy would destroy rather than preserve efforts to advance employee health and well-being.

As much as Bagley and I are aligned in our views opposing discrimination, it remains that wellness programs, and public health practices more generally, are far from indiscriminate. Targeting select populations who would benefit the most from interventions is standard work in both prevention and intervention program designs. Tobacco prevention and smoking cessation related policies, taxes, incentives and, most importantly, educational offerings are, of course, aimed at smokers or those at highest risk of becoming smokers.

“Might a reasonable person believe that offering financial incentives aimed at supporting a modicum of effort at self-care is rational if not admirable?”

When the unquestionable goal is health improvement, is the use of incentives to encourage screening any more or less reasonable than using financial incentives to curb smoking? Arguably, the same reasonable people who believe we are free to be foolish are those who also believe driving drunk should bear a high cost. Though I fundamentally oppose financially penalizing or otherwise stigmatizing individuals based on their weight, is raising taxes on sugar an unreasonable idea? Similarly, as much as I have long objected to any forms of insurance risk rating or cost shifting, are inducements to participate in health screenings (assuming privacy protections are faultless) reasonable when accompanied by generous offerings of health improvement support? Are incentives viewed favorably when ensconced in an environment where employee health and well-being are core organizational values? What’s more, given the ACA wellness provisions require reasonable alternatives, can penalties be considered draconian if an employee can opt out of screening as they see fit?

Given the costs of high-risk behavior, might a reasonable person believe that offering financial incentives aimed at supporting a modicum of effort at self-care is rational if not admirable? One survey of employers and health care consumers indicates 91 percent of those surveyed agree that wellness programs are a perk that helps employees improve health and, interestingly, the same percent agree these programs are sponsored by employers to cut costs. Yet, this same survey showed that 13 percent of those living with chronic conditions are unwilling to participate in a healthy living program that is associated with their receiving full benefits. Are incentives a worthwhile strategy if they fail to motivate those who would benefit most from health improvement?

The full, open access version of this editorial along with references, is at the American Journal of Health Promotion. There I interview economist Dr. Steven Huchendorf about why he uses an incentive system in his university courses and how he addresses the questions above.