As a former collegiate gymnast, I’ve experienced the ‘twisties.’ It’s a disorienting feeling where your inner gyroscope malfunctions and you don’t know which way is up. I was in a national championship meet at the University of Iowa’s UNI-Dome. A twisting full pirouette move I had done on the high bar hundreds of times inexplicable turned into a brief but scary psychedelic sensory overload experience. (And, no, there were no pre-meet mushrooms involved). I attributed it to being in a dome with a massive white ceiling that didn’t afford me the visual ‘spotting’ I did while doing giant swings. Still, it didn’t hinder the other gymnasts who outscored me that day.

And so it was with Simone Biles at the 2021 Tokyo Olympics when she launched into a vault and experienced the twisties doing a skill quantum times more complex and riskier than the tricks I was doing decades ago. Biles decided to take the most public mental health day in history rather than risk more twisties while doing death-defying moves. Her decision may earn her a more meaningful role as an influencer than any number of additional gold medals ever could have. We think of resilience as the ability to bounce back as if it’s an innate ability; as if it’s simply a matter of getting back on the horse. But experts teach us that resilience is a learned skill that starts with self-care. Biles modeled the first step in resilience by not blithely remounting the vault but, instead, putting her health ahead of a task at hand.

Considering the many such societal episodes this past year, we feel downright prescient by having focused our HEROForum21’ theme on “Bouncing Back: Boosting Mental Resilience and Building Organizational Immunity.” (Go to: https://forum.hero-health.org/) Though Biles offers the most recent societal discourse about resilience, the COVID-19 pandemic alongside the racial strife and related infectious disease disparities this past year have issued us countless reminders that deepening our capacity for resilience has never been more imperative.

Another of our prescient decisions was to invite two Olympic gymnasts to join us in one of our General Sessions to discuss their learnings about both individual and organizational resilience. Like Simone Biles, our keynote speakers, Justin Spring and Wendy Bruce-Martin, both bounced back from dramatic physical and mental traumas. For Bruce, her resilience was seriously tested while performing a vault that, coincidentally, was the most difficult vault being tried on the world stage in her era.

An Interview with Olympian Wendy Bruce-Martin 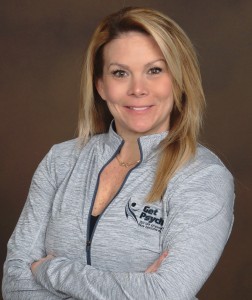 Wendy Bruce-Martin competed on the U.S. Women’s Gymnastics Team in the 1989 World Championships in Stuttgart, Germany, and was a team bronze medalist in the 1992 Olympic Games in Barcelona, Spain. Today Bruce is a mental toughness trainer and coach, who regularly writes about “getting psyched” on her web page. Where Biles’s approach to resilience featured physical and emotional self-care as the prime response to anxiety about the “twisties”, Bruce turned to positive mental self-talk as a key resiliency strategy. Has the culture of sport changed such that Bruce may have taken a different approach to cope during today’s world competitions? To learn the answer to that question, you’ll need to be at HEROForum21 in Austin, Texas on October 14th for the plenary session with Olympians Wendy Bruce, Justin Spring and, psychiatrist, Dr. Nadia Charguia. For now, here are some valuable insights from this amazing athlete, coach, mom, and writer.

Paul Terry: You got a lot of attention for balking at a risky vault during competition but then performed it beautifully when it mattered most. It’s tempting to credit elite athletes with superhuman qualities but can you describe in normal human terms how you bounced back from such a high-stakes public setback?

Wendy Bruce: Unfortunately, I had a lot of fears and anxieties in gymnastics. The particular “event” you are asking about is when I balked three times in a row on vault at the 1989 Championships of the USA. I hated vault, but it was also my best event. I never grew to like vault, but it was something I had to do if I wanted to make the Olympics. It wasn’t that I was superhuman or without fears and anxiety, in fact, I had many times in my career when my fears and doubts worked against me. I am a very competitive person, and I was also my biggest competition. But when my success was in jeopardy, such as with that vault in 1989 or falling at the Olympic Trials in 1992, I always came back fighting and did what I needed to do to survive.

“Athletes need to be able to separate who they are from what they do.”

Paul Terry: I so admired how Simone Biles modeled what it takes to overcome the stigma related to mental health by putting her own emotional health ahead of the pressure she was feeling in the recent Tokyo Olympics. What supports do you build in the gym so young athletes are more apt to bounce back from, rather than suffer under, setbacks?

Wendy Bruce: We commonly think of a rubber band and its ability to bounce back after stressed to its extreme length. But that rubber band will lose its elasticity and/or break when it isn’t taken care of. Athletes need to know they will be physically, psychologically, and emotionally safe. This means they trust their training; they have been properly physically trained and are able to successfully perform the skill. They must trust they can control their focus and use the mental tools like positive self-talk or imagery. They also need to know they will be able to put themselves out there, and regardless of the outcome, they will be okay. They will not be embarrassed, ridiculed, or punished by their coaches, parents, teammates, or themselves. If the athlete is training in a harsh environment, eventually they will lose their ability to bounce back and could break. It is imperative the athletes know they will be loved and accepted regardless of their performance. They need to be able to separate who they are from what they do.

The sexual abuse crimes committed by Larry Nassar were a devastating tragedy for his victims as well as a serious blow to the credibility and trustworthiness of leaders in the gymnastics community. What do gymnastics leaders need to do to rebuild trust?

Wendy Bruce: There were so many failures that enabled this type of predator. But until the organization takes responsibility for their actions, I don’t think trust can truly be earned. I know USAGymnastics can’t admit wrongdoing because of ongoing legal battles, and I am not sure they can ever admit it publicly. But if they can’t, USAGymnastics may need to start over with a new generation of leaders.

It’s not only psychological safety that has been missing in many gymnastics gyms, some young athletes have stepped forward with stories of abusive cultures where fear of not making the team has been an intentional motivational strategy. This has reportedly occurred alongside body shaming, minimizing injuries and closed workouts to hide verbal abuse. What philosophy shifts coaches towards kinder, gentler approaches?

Wendy Bruce: Being kind isn’t a gentler approach. It’s just not being an asshole. These gymnasts can work hard, be pushed, and held to high standards without personally attacking, threatening, harassing, or bullying them when they make mistakes. Coaches and parents use these tactics when they lack the skills or education needed to teach the athletes. The athlete comes to the coach to learn, not just the technique of a flip, that’s easy to teach. It is much more difficult to teach the social, emotional, and psychological skills to their athletes, especially when there is no formal education standard set by the state for coaches to work with and mold children.

At HEROForum21’ we featured Olympian Jesse Diggins who candidly shared the depth of stigma she felt dealing with her eating disorder. Building the combination of lightness and strength needed to excel at gymnastics while discouraging eating disorders is a big challenge. How can your sport strike the balance for disciplined training that doesn’t evoke extreme behaviors?

Wendy Bruce: I think our mental health is being talked about by former high-level athletes and so people are starting to take it seriously. USAGymnastics has added a wellness program and the athletes are being educated on their mental and physical health. I think before athletes didn’t know how or what to eat, so they tried to figure it out on their own which usually leads to unhealthy practices.

That USA Gymnastics has added a wellness program for athletes is a fitting acknowledgment of how important self-care steps such as sleep and nutrition and stress management can be in emotionally charged situations. Healthy thinking and finding purpose will also assuredly factor into designing antidotes in high anxiety sports. In our full interview, Bruce spoke of unconditional love and how young athletes “need to be able to separate who they are from what they do.”

We invited psychiatrist Dr. Nadia Charguia to join Olympians Wendy Bruce and Justin Spring on our main stage at HEROForum21 this year so we can go deeper in our explorations of how learnings from world-class athletes can apply to corporations trying to bounce back from a painful year. Dr. Charguia directs resiliency programs to help healthcare workers cope with today’s intractable stresses. As Bruce suggests, it undoubtedly relates to treating our colleagues as people first and as employees second.

See below: Paul Terry, Author of this post and HERO’s Senior Fellow, pictured in his collegiate gymnastics career. 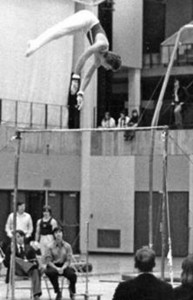