On November 5th, 1997, Bill Whitmer was at work in Suite 100 of an office building on Valleydale Road in Birmingham, Alabama. He signed the articles of incorporation for HERO, and the next day he paid $26 dollars at the Office of Probate at the Jefferson County courthouse and got HERO’s first stamp of approval from probate Judge George R. Reynolds.

As one of HERO’s legacy stories has it, Bill believed the worksite health promotion field needed more research to validate the benefits of investing in employee wellness. He enlisted his friend and long-time associate Mark Dundon, President of the Sisters of Charity of Nazareth Health System, to help convene a band of fellow leaders in wellness. You can still find an article Dundon wrote in 1996 extolling Nazareth’s investment in a “System for Employee Fitness.” 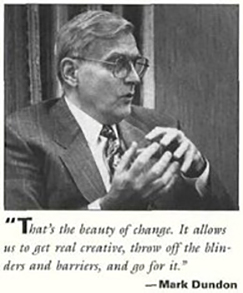 The first founders’ meeting was promoted by Bill Whitmer as the wellness community’s equivalent of the Jackson Hold Think Tank, which had recently convened the leading thinkers in health care reform during the first cycle of healthcare legislation.  At this HERO gathering Whitmer asked attendees for ideas about a worthy research topic. David Anderson and Ron Goetzel commiserated at lunch about a “back of the envelope research idea” they had been discussing casually for a few months and presented it to the group when the meeting reconvened. StayWell (David’s employer) had employee health assessment databases and Medstat (Ron’s employer) had health care claims datasets for some of the same large employers. Ron and David proposed that HERO sponsor a collaboration on a serious study detailing the relationships between health risks and heath care costs. Conducting this study would require permission from the employers, but both believed their clients would be very supportive of such research if appropriate attention to data security and privacy was assured.

A serious study of this nature, they said, would need serious funding. This was one reason David and Ron had not pursued the idea earlier. Whitmer turned to Dundon and asked, “can you step up with the seed money?” Dundon immediately said “yes” and agreed on the spot to fund a majority of the cost if others around the table added what they could to cover the rest. It was this prescient leadership among business leaders, health promotion practitioners and researchers that led to the 1998 publication of the “HERO Study” along with four other peer-reviewed publications using the same data set. The Journal of Occupational and Environment Medicine, where the study was published, reports that this study and issue of the journal were by far the most requested since the journal’s inception in 1959. To this day, the HERO study is also still likely the most cited research paper in the field of worksite health promotion.

Twenty years later, HERO continues to thrive and grow in national influence because of the continuous involvement of so many of you reading this post. Ron Goetzel presently serves as HERO’s Board Chair and, of the original Board of Directors appointed in 1997, David Anderson, from StayWell, retired from the HERO’s Board in 2016 and Nico Pronk, from HealthPartners, returned to the HERO Board in 2017. All three of these leaders have been recognized with HERO’s “Mark Dundon Research Award.” HERO originally incorporated to advance the research and education agenda articulated in articles A and B below. A review of HERO’s current strategic plan shows that, while our language and scope of effort are considerably more detailed, the essential vision from twenty years ago remains robust and relevant.

Your HERO Legacy Stories Wanted! Win a chance at a HEROForum18 registration. ($795 value)

We will be honoring Mark Dundon and the late Bill Whitmer and celebrating our 20 years of incorporation by working hard on HERO’s vision that “all workplaces will positively influence the health and well-being of employees, families and communities.” One important way to honor the legacy of an organization is to retell the stories that brought us together, set us apart, influenced our direction and illustrate how our past can inform our future. Bill’s vision and entrepreneurial spirit was a rich source of many instructive and often entertaining stories!

One of the many features of our new website that we think you’ll love is our Blog section. You’ll see that, in addition to featuring stories from the HERO team, we continue to look for opportunities to feature our HERO members. We are looking for stories we can publish as a Blog post (usually about 750 words) and store for HERO posterity. I’ll be the editor for these submissions and will share my top picks with the HERO team for final consideration of which ones to publish. I will engage the Executive Committee of HERO’s Board to make a final decision about the winning submission that will be awarded a HEROForum17 scholarship. Send your submissions to me at paul.terry@hero-health.org.