What is the Next Big Thing in Workplace Health and Well-being?

Home Blog What is the Next Big Thing in Workplace Health and Well-being? 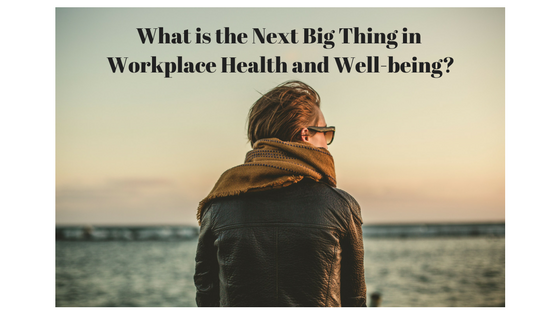 Which is most predictive of future health and cost: cholesterol or happiness? Does having a life purpose generate greater health behavior change than a Fitbit? How about sleep? What is hyper-personalization? How do we change a culture of health; what does the grocery store or our friends and colleagues have to do with that? Is there a scientifically rigorous way to find out? Given today’s market reality, how can this be done quickly and with validity? Can innovative answers to these questions measurably move the needle on changing a population, a workplace, or a community?

These are big questions. In this month’s “Innovators Issue” of The Art of Health Promotion, I introduce you to the types of people and organizations we believe will be answering them. Joined by my friend and longtime wellness leader Neal Sofian, we interviewed a dozen diverse innovators to get a glimpse of where, what, and how change will occur in our field going forward. In the past, health behavior research was primarily conducted in universities or academic medical institutions with results disseminated through academic journals and then occasionally informing new products entering the marketplace through private companies and/or organizations affiliated with universities. The process could take many years and followed traditional medical research protocols. It produced significant health promotion models and programs such as from James Prochascka, Victor Strecher, Edward Wagner, and Kate Lorig that are still in use today.

Academic scientists influenced the advent of face-to-face coaching (individual and group), and later, phone-based coaching generally based on MI and the “trans-theoretical model.” Similarly, the internet, as both a source of information and social networks, also benefited from university-based researchers who studied tailored messaging and the benefits of having many sources for acquiring information. One example of an innovation that ran far ahead of empirical research has been the significant movement toward the use of incentives to drive participation. Although most of this has been focused on incentives to drive participation in health assessment and biometric screening, researchers like Kevin Volpp and Edward Deci are contributing to a growing body of evidence concerning the promise and pitfalls related to the role of incentives in supporting sustainable behavior change.

Writing about “Innovation and the vital role of discernment” in year’s past, I argued that there is an opportunity cost to looking for the next big thing in a nascent field. When we have yet to master processes relating to what has already been proven effective, it behooves us to weigh the merits of promising ideas against proven, but underutilized ideas. This is particularly an issue for the worksite wellness field where most companies say that they have wellness programs but very few employ best practices. According to business writer Theodore Levitt, those overly enamored with creativity fail to separate “the relatively easy process of being creative in the abstract and the infinitely more difficult process of being innovationist in the concrete.” Levitt argues that in many cases, ideas are not readily actionable but, worse, are “destructive in actual operation.” That’s because original ideas are “judged more by their novelty than by their potential usefulness.”

Is there a “Right Mix” in workplace health promotion innovation?

To be sure, easy to use apps, smart use of big data, and interventions designed to address major or orphan health issues are vital to progress in health promotion. At the same time health promotion innovators are inventing new programs, it is at least as important to exert innovative leadership that drives culture change if we expect to make a difference. Leaders, according to scholar Barbara Kellerman, “engage followers in the joint pursuit of mutually agreed-on goals.” She also notes that these goals “represent significant, rather than merely incremental, change.” The simplest yet most significant changes leaders can affect in personal or community health will relate more to policies, leadership practices, and the effective integration of innovative products than to any new product or service offered in isolation. When considering innovations relating to changing something as intractable as a culture, simple is never easy. Read Tom Farley’s “Saving Gotham: A Billionaire Mayor, Activist Doctors, and the Fight for Eight Million Lives,” to be reminded of the arduous complexity of changing policy no-brainers like limiting access to supersized sugar drinks. For a more hopeful rendition of the sugar wars, read O’Connor’s “Putting sugary soda out of reach” for examples of policy leadership gaining acceptance and public health inertia.

What’s happening in the marketplace of innovation is truly exciting. Tools that drive and support change are emerging at an unprecedented pace. As a research organization, HERO is apt to resist a path of simply assessing and promoting new ideas and tools, however shiny. Change is complex but that is the business HERO members signed up for. And that’s where leadership comes in. Innovators will help provide the tools to help us succeed. Great innovators will connect all of these tools for change into true solutions.

Join our Webinar on “The Innovator’s Issue”

The Art of Health Promotion Webinar